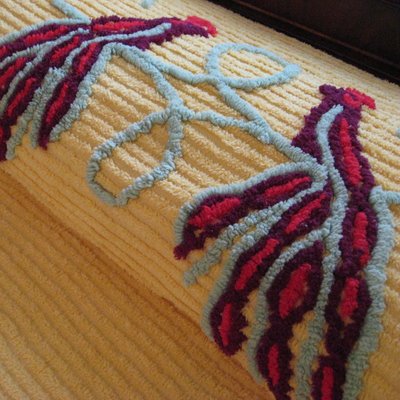 It was a stormy afternoon in late October “What are you two doing up there?” my mother yelled up from the bottom of the stairs as Joey was getting close. Too late! As I pulled off to answer her, Joey shot over and past my face and it all landed on my yellow chenille bedspread. I hurriedly yelled back, “Nothing Ma, we’re listening to records.” Whew! I wiped the mess up with my jockey shorts and quickly hoisted them back up. While buckling my jeans, I jumped on the bed, sat on the stain, and pretended to read the LP liner notes on the back of the cast album of No Strings, a musical about an illicit interracial romance. I turned up the volume on Diahann Carroll singing “Loads of Lovely Love.”

Joey was my stocky Italian neighbor who lived around the corner and was a year behind me at Sacred Heart Grammar School. His sister, Celeste was in my class and we called her “Celeste the Chest,” because even in the 8th grade she had big bosoms that the school uniform only accentuated. They were so big that she self consciously walked with her arms folded under them to keep them hidden and aloft. However she was the brightest in the class, the teacher’s pet and was often asked to be the monitor when Sister Vincent left the room. She got back at my tauntings by ratting me out on my class clown shenanigans when Sister returned.

Joey came from a typical large Italian family complete with an ancient toothless Sibyl-like grandmother living in the extra bedroom. They became my surrogate family and Joey’s mom often asked me to have supper with them – I always eagerly accepted. In time I became a pest. I would doggedly hang around, sort of sad sacked, begging to be invited over. No one was ever invited to eat at our house since my Dad had Parkinson’s disease and all visitors were forbidden. So as a typical child I sought love where I could find it at Joey’s dinner table and in Joey’s burly lap.

So on that rainy afternoon, I had invited Joey up to my bedroom to listen to records. We sat on the bed next to each other as I commented on Richard Rodger’s clever idea not to use strings in the instrumentation of his show, No Strings. My hand lay idly next to his soccer thigh as my finger gently stroked the outer seam of his jeans. He did not pull away as we both stared ahead listening to Richard Kiley sing “The most entrancing sight of all is yet for me to see…” My finger tracked a path to his inner seam and traveled north to the bunched-up juncture where the seams gathered at his crouch. Slowly I maneuvered up and flicked the copper slider open on his zipper as I pulled it down over the shiny teeth while they made a nice metallic purr. Joey was wearing box shorts so the jack quickly jumped out of the box. “No Strings, No Strings…” It didn’t take long, but long enough for my mother to get suspicious of why we were being so quiet in my room. “What are you two doing up there?”

Joey jumped up and ran down the stairs, saying good bye to my mother and slamming the screen door behind him as he ran out into the autumn storm. I was still shaking in fear of almost being caught. Side One was over and I flipped the black vinyl disc to Side Two. Diahann CarrolI sang softly to me, “And the dearest love in all the world is waiting somewhere for me…” I quickly took off my BVD’s and with some spittle cleaned up the chenille. But what to do?  I put them back on and walked nonchalantly downstairs to the bathroom. Then I washed the drawers in the sink using the golden bar of Dial soap, and I wrung and wrung every drop I could to get them dry as possible. I put them back on. During dinner I could still feel the clammy bottom of my underwear wedging up and moistening up the green vinyl seats on dinette chair. Pretending to clean up some crumbs, I used my Marcel paper napkin to dry off the chair as I got up to clear the table and wash the dinner dishes.  It wasn’t till Bonanza was over that they were fully dried.

At 10 pm I went upstairs to bed. As I pulled down the covers on my side of our double bed I noticed a small translucent stain on the pillowcase. I quickly jumped, in, pulled the covers over my head and waited for midnight.  Quietly I slipped out of my bed and silently removed the offending pillow case. The house was eerily still, with just the whirr of the fan blowing hot air up through the vent in the bedroom floor grate from the basement’s fiery furnace two floors below. I reached the top of the stairs and slowly descended step by step like a somnambulist, being careful not to slip on the carpeted treads. I was wearing my socks, so I almost skidded on the last one as I grabbed onto the varnished banister to keep from falling but still landing on my butt.

I reached the bathroom and in the darkness turned on the faucets, trying to balance a warm flow of a slow steady stream so as not to make a splashing noise while the water hit the enameled basin. I held the pillow case in my hands, gingerly fingering from the outer edge until the tip of my forefinger reached the dry parchment-like spot. I moved the cloth back and forth under the cleansing stream, gently rubbing with my thumbs like a priest cleaning an ablution cloth after communion. Using a towel that hung on the rack jutting out from the Sears & Roebuck pink plastic bathroom tiles, I pressed out the stain and my afternoon sins.

As I was starting to return upstairs, from the dark cavern of the downstairs bedroom my mother moaned out, “Anthony, what’s all that noise? It’s after midnight.” I quickly replied: “I had to go the bathroom, Ma. Go back to sleep.”  “Good, I warned you next time you’ll have to wash your own damn sheets if you pee in that bed again,” she sniped.

I was so nervous, I tripped again on the steps going back up, knocking an arts and crafts picture I made of a Pixie that now appeared to be leering down on me in judgment. I cursed my mother underneath my breath for fouling up my afternoon plans with Joey. I  put the pillow case on the grate and let the hot air blow through the thin worn out fabric. I waited for the next cycle of hot air to start blowing up again to warm up the chilly room and cover my footsteps  as I put the case back on the pillow and flipped it over so the almost dry spot was on the bottom.

My father was snoring lightly in the next bed and I had to push my brother Michael over in our bed to make room for me. I stared up at the attic ceiling and watched the shadows, menacingly dance made by the trees buffeted by the still continuing storm. It was past the witching hour as I drifted off to sleep, dreaming of demonic pixies, Sears & Roebuck catalogue men in their underwear, cackling witches, Celeste tethered like a balloon in the Macy*s Thanksgiving Day Parade  and Joey sleeping across the woods… “waiting somewhere for me”.

The storm subsided. I woke up the next morning with an angelic smile on my face as I hummed  the song, “Joey – Joey Joey, – Joey – Joey Joe” from the Frank Loesser musical, The Most Happy Fella. I stretched my arms luxuriously back behind my head in bed and kicked off the covers. I figured out when we would meet again at Bingo!   But oh, there was another damned spot on the sheets…