A Short Drama in Three Acts with Epilogue

Anthony Napoli and the Holy Spirit

Costumes by Beulah Politti, and her staff of old Italian ladies

Music by Miklos Rosza as adapted and taped by Fr. Dominic Leo, the parish priest.

The Upper Room, Golgotha and a Tomb

Judas played by Anthony is 16 years of age with a lean, dark and hungry look similar to a young Basil Rathbone.

Marc is 17 years old with red hair, porcelain white skin and rounded muscles and plays The Christus as a  teenage Jeffrey Hunter.

Betty Davis is her real name; 15 years old but has been around. She would have played Rizzo in Grease if she were born later. – “If she coulda been, she woulda been.”

Louie is a beautiful 14-year-old Italian boy who later became a hairdresser.

It is the weeks before Easter. Anthony after attending the parish’s Passion Play the previous year is in rehearsal for this year’s production.  A passion play is a staging of the last days of Jesus Christ, usually from the Last Supper to the Resurrection.

Sacred Heart’s Passion Play is held in the school basement, called Gallo Hall. The hall was named for one of the founding pastors and is also the site of Saturday Night Bingo, School Talent Shows, Class Assemblies and Social Events.

The spectators sit on metal fold out chairs set theatre style with a center aisle facing a typical small grammar school stage.  The CYO, Catholic Youth Organization, produces the production and the cast is comprised of the parish club teens – sons and daughters of second generation Italians.

The hall is darkened and lots of colored gels should be used to set the stage. There is no scenery to speak of beside a long draped table for the Last Supper; a large wooden cross for the Crucifixion and a paper mache tomb made from a large refrigerator cardboard box for the Resurrection.

All the music is from the LP collection of Father Leo. It is comprised of cuts from the soundtracks of the film scores of Miklos Rosza’s “King of Kings” and “Ben Hur”. It has all been copied to an unwieldy cumbersome TEAC tape machine and is played over the school sound system.

Beulah and her old Italian ladies of the church have made colorful costumes for the temple priests; plain rough canvass robes for the apostles; leather skirts for the Romans and a white cotton vestment with matching loincloth for Jesus. Wigs and beards are fashioned from strands of knitting wool and mop rope.

William and Lillian Andersen, a married couple that teaches at the local Junior High School, direct more like traffic cops. They move the crowds around the stage to make tableaux vivants. Lillian loves her pizza breaks during rehearsals. William likes to teach the boys how to apply stage makeup.

The style of acting and mise en scene should be reminiscent of Luchino Visconti – operatic and passionate not unlike a silent movie staring Gloria Swanson and Ramon Navraro. Think Vincente Minnelli and his staging of “The Nativity” for the Christmas Show at Radio City Music Hall minus the camels. 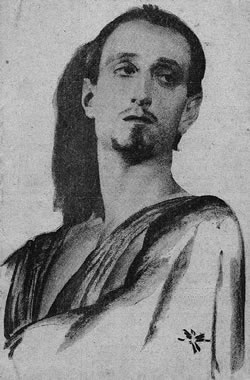 Hey Marc, does my beard look all right?

Hell, yeah it looks like Anne Marie’s pussy but upside down!

How would you know?

I know more than you think I know…

Here, can you make sure my makeup is covering the back of my neck?

Let me do your back now so it will be easier later for the crucifixion. We don’t want a white pasty Irish Catholic Jesus on the cross.

(As ANTHONY’s hand moves over the small of MARC’s back, it gets quiet. MARC catches ANTHONY’s eyes in the mirror.

Have you seen my jar of oil…(she stops) …Hey, what’s going…?

W-w-w were just going over lines.

“One of you shall betray me”

Yeah?  Well get it over it Mary! (She chortles)

(All share the bread and wine except for Judas)

I am not worthy even to wash thy feet.

Verily I say into you, before a cock crows three times, one of you shall betray me. 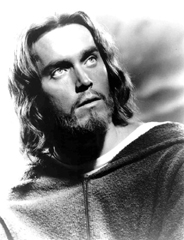 Hey watch it! You’re dripping it all over my costume!

(At this point MARC is wearing only a white loincloth)

Do my legs too.

(ANTHONY gets down on his knees and starts to apply the lotion, starting at the calves and eventually moving up MARC’s legs)

Do I look sweaty enough? I love the way the light shines on my body when I hang up there.

Hold on, I missed a spot.

(Applying some to his inner thighs)

theme from “King of Kings”)

(ANTHONY’s hand flutters up lightly touching the outer rim of MARC’s garment. He holds his breath and his finger still. Both do not move for a few beats)

(Breaking the freeze, he runs off almost late for his entrance)

(Cue the ROMANS and the TEMPLE PRIESTS)

They know not what they do.

(Hanging on the cross, his feet resting on a little wooden platform to hold him up)

(Shouted out very angrily doing the citizens of Oberammergau proud)

Isn’t he one of them?

For 30 pieces of silver, he betrayed him with a kiss!

(Eerily looking like Fagin from “Oliver Twist”, he spits at Judas)

I have sinned against God and Man!

(Judas runs out in great despair, hands in air like a Yiddish actor playing the storm scenne in “King Lear.”)

Into thy hands I commend my spirit.

(With a great sigh) 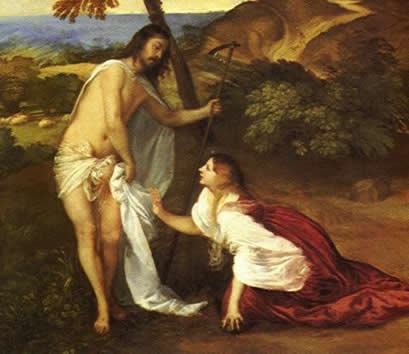 Whew, I am glad that’s over till next year.

(ANTHONY helps MARC down from the cross.

He grabs him around the waist and lowers him)

Damn you’re heavy. You smell like a baby’s bottom.

(As the descent continues, ANTHONY slips slightly and holds him tight in his arms as they gently crash onto the stage floor. They lay still for a moment like a Pieta)

“In three days I will rise again”…

“Lo today you will be with me in paradise!”

(They both laugh and rise)

I have brought my oils to anoint my Lord but they have rolled the rock away and there is no one in the tomb.

Why seek ye the living among the dead? He is not here? He is risen as He said!

(Suddenly appearing upstaging the Angel, hands raised to the heavens)

(MARY draws near to Him)

Do not touch me! I have not yet ascended to my Fathter.  Remember me. I will be with you always even onto the end of time.

(She drops the jar, swoons and runs off stage almost knocking down ANTHONY standing on a chair with a rope around his neck)

(The 30 pieces of sliver roll down stage)

(Cue the “Alleluias” from the finale of  “Ben Hur”) 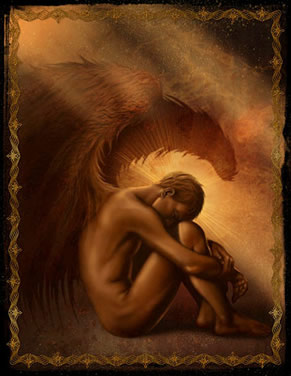 Grab me a towel pal.

Hey dummy, you missed a spot.

(ANTHONY towels his back)

Another openin’, another show

From Philly, Kansas and Balti –mo”

Hey, I think you need to take a shower to get the rest.

My Dad is out of town– wanna go up to my house and hang? You can help me get this crap off.

(Quietly ANTHONY cleans MARC off. Taking his time, turning over the towel over and over, restoring MARC’S skin from Max Factor #5 tan to his natural Carrara Marble white, He notices his blue veins, light freckles and wisps of red hair on his arms.)

“A chance for stage folks to say hello

Another openin’ to another show.

(He stops as BETTY DAVIS slinks in dressed in a new Montgomery Ward A-Line dress; shorter than she was allowed to wear at school)

Hey Marc! You were great tonight! You shined! Mrs. Andersen has invited me out for some pizza? Wanna come along?

(She poses in the doorway)

(Stunned at the transformation from Mary Magdalene to Teen Dream)

I am starving!  Yeah lets do it.

(BETTY and MARC start to exit but stops…)

(Singing under his breath)

(ANTHONY stands there alone, holding the towel and the empty Baby Oil Lotion. He takes the noose off around his neck and starts to take off his shirt, changing out of his costume)

(He sighs, standing like Ave Gardner as Julie LaVerne on the dock at the end of the movie “Show Boat”)

(And suddenly there was a figure in silhouette appearing in the doorway, framed by the bright lights from the stage)

(ANTHONY wipes the sweat off his brow. It is red from the makeup)

Hey, you missed a spot on your back. ( he draws near)

The following year, Anthony decided to write his own Passion Play called, “The Road to Golgotha.”

I discovered a copy of the script in that bottomless cardboard box my sister found in the family attic this past summer.

He made Judas a sympathetic character that acts with Jesus to fulfill his plan of redemption.  How curious that it is so similar to the controversy over the recently discovered “Gospel of Judas”. Both have the same basic premise.

The CYO never performed it.

After re-reading the script, I thought it best that is stay unpublished and remain on the bottom of the box of ones youthful attempts. However, it inspired me to write the above Pirandellian  “Mystery Play” based on true incidents.