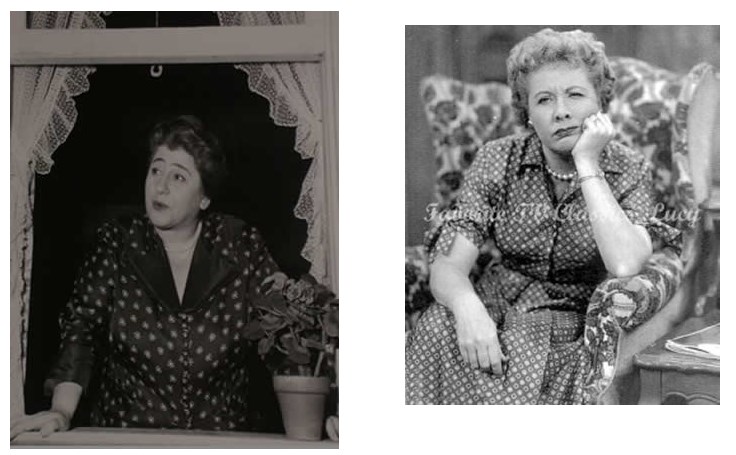 I was so excited. My Dad was taking me to Union Square to see my two favorite TV stars live, in person: Molly Goldberg and Ethel Mertz. My parents loved The Molly Goldberg Show and I Love Lucy. I would squat on the floor like an Indian between Mom and Dad who sat behind me on their gray and pink floral art deco couch. I got to stay up a bit later when these two shows were on. Mom usually bought special snacks, Wise Potato Chips and some of my favorite Hoffman Cherry Soda.  Ethel tickled me when she would stick out her tongue behind her husband s Fred back. I laughed at Molly’s Yiddish accent as she leaned on the window sill and yelled out: “Yoo-hoo, is anybody there…?”

It was a warm Brooklyn day in June when we hopped in Dad’s black DeSoto – just him and me to see Ethel and Molly. My father was very quiet as he maneuvered down Flatbush Avenue passing the Fox and Paramount Theatres, past the red and gold storefront of Junior’s. The Myrtle Avenue El Train rattled by us as we reached the Manhattan Bridge.

I turned the radio on as usual as we climbed up the bridge ramp but my dad reached over and abruptly shut it off. I thought I had done something wrong. He said I didn’t but to be very quiet when we got to the rally and to stay next to him and be a good boy.  Manhattan crested into view as we turned onto Chrystie Street directly into Chinatown onto Jewtown to the East Village along Second Avenue. My dad was great at finding parking spaces and he somehow squeezed into a tight spot on East13th Street behind Luchow’s, the famous German restaurant.

I was bursting with anticipation to see the TV stars as I held my Dad’s hand, who was still strangely solemn.  As we walked up 14th Street, huge crowds were gathering around: men dressed in dark suits, all wearing Fedora hats; ladies with hats or kerchiefs. Some were carrying homemade signs which I couldn’t read. They were all quiet and solemn too like a funeral, like black ants assembling around a hill that I had seen once in Prospect 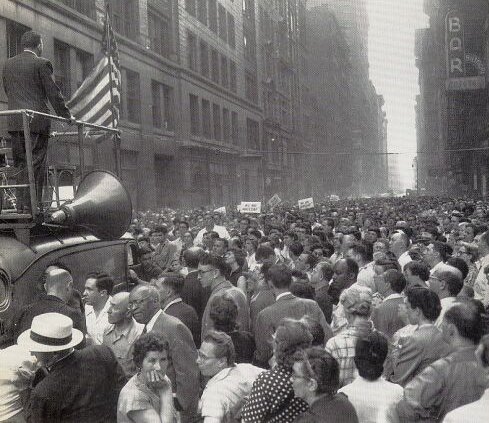 When we got to Union Square it was so filled with adults that I couldn’t see the stage. Dad put me on his shoulders so I could just barely make out the speaker’s platform. I strained to hear what they were announcing. After many speeches and cheering I ask my Dad when Molly and Ethel when coming out? He took me down off his shoulders and looked amusingly at me and laughed slightly and smiled.

“Who, how did you get that idea?  Ha-Ha… Ah …. No, no you silly boy. Anthony, we are here for an important reason. We are all to protest a grave injustice being done to Julius and Ethel Rosenberg.”

“So Molly and Ethel won’t be here?”

“No they won’t be, you go the names mixed up baby.

“Oh” I said with sad disappointment.  So Julius and Ethel will be here?”

‘No they won’t be” He started to explain but stopped when the crowd began yelling again.

“Just be quiet and when we are done I will take you up to the Merry-go-round in Central Park.”

I held his had tightly now since the crowd was beginning to push and swirl around us, like dirty bath water whirring down a drain.  I didn’t’ understand but I knew something special was going on by the way people were chanting. Some women started to cry and wail. I couldn’t help it and I started to cry too not knowing why. After an hour, Dad sensed this was all a five year boy could take and we walked back to the car. I knew to be quiet.

On the way up to Central Park, my dad explained to me that the Rosenbergs’ were unfairly tried for  spying just like Sacco and Vanzetti, two Italians that I heard my Dad arguing about with my Aunt Mary. We were there to speak out against it. He mentioned something about a big bomb and Russia. I was so confused but happy to be alone with my Dad and to hear him talk with such passion even though I could only grasp a little. I asked my Dad what would happen to them as he lifted me up onto a Carousel horse. He didn’t answer me as he stood next to me, holding me and onto his hat as the horse went up and down and round and round – the organ played the Sousa march”El Capitan”.

We got home around 5:30 pm just in time for our Friday night supper. Every Friday my Aunt Laura who lived down the block on 10th Street would join us for dinner before a movie. Mom had prepared fried fillet of flounder that night since we couldn’t eat meat. Once again, it was strangely quiet at the dinner table, even my argumentative Aunt stared into her bowl of macaroni with plain tomato sauce.

After supper, my Dad went into the living room to read the evening edition of The Daily News. My Mother asked my Aunt if she didn’t mind not going to the movies tonight, she wasn’t feeling well. She went to lie down on the bed. She had been doing that a lot recently. My Aunt Laura cleared the table, washed the dishes while I dried.  I asked her what was going to happen to Julius and Ethel.

“They are gonna fry those awful Jew spies. I wish I could pull the switch myself. They are going to electrocute them tonight at 8 o’clock and I hope they both go straight to hell and burn again. Wait and see, they say the lights will dim when they pull the electric chair switch up in Sing-Sing”

I once stuck my finger in the electric socket when I was exploring so I knew this was a very bad thing. A shudder ran down my spine and I almost dropped the bowl I was wiping with my terry cloth dish towel. I started to ask another question when my aunt brusquely told me it was time for bed even though it was not quite the usual 7:30 pm. 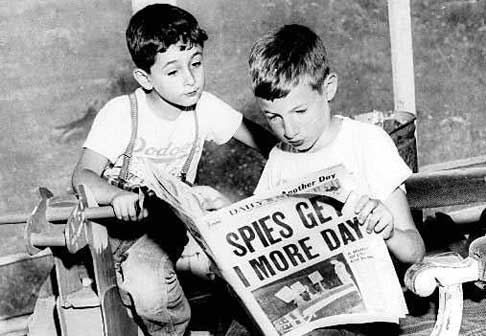 When I said my prayers and asked Jesus to help take care of Julius and Ethel my aunt gave me a slap.  I spun around and looked at her meanness. I climbed into bed and pulled the sheets over my head, hating my aunt.  I couldn’t fall asleep. I could hear my Father watching TV and the front door close behind my Aunt as she left.  My Mickey Mouse watch read 7:45 pm as I tossed and turned. It seemed like an hour before 8pm came. I was waiting for the lights to go out so I knew they were dead.

Mickey’s big hand with a white glove reached 12 – 8pm. I shot up and ran and looked out of the window.  I swore I saw the cobra-headed street light flicker and flare when a muffled collective moaning rose from the neighborhood like when the Dodgers lost to the Yankees in the World Series.  There was no one on the street.

I heard someone coming down the hallway and I jumped back in bed and pretended to go to sleep, very still. I could smell my Dad’s Old Spice as he kissed me on the forehead and whispered, “Good night silly boy.” He sighed and went back to the parlor. I slept soundly that night and in the morning my mother made us pancakes as if nothing had happened.

My Mom wearing a black lace mantilla took me to church at St. Thomas Aquinas.  After 9am mass, my dad drove us out to Grandma’s for Sunday afternoon dinner always held at 1pm after my Polish uncles got back from the 12 o’clock mass. . We took the new Gowanus Expressway to 96th Street in Bay Ridge.

“Anthony, why don’t you turn the radio on?  Aren’t the Dodgers playing?”

I looked up at him as he smiled at me as I pushed the button. I went back to school on Monday. No one talked about Ethel and Julius. I took 9th Street home after school so I could pass the Avon and RKO Theatres to see what was playing. My Mom always took me on Friday nights with Aunt Laura to see the double features. That night we watched I Love Lucy on channel 2 and The Molly Goldberg Show on channel 4….

“Yoo-hoo is anybody there…?

Julius and Ethel Rosenberg were not. 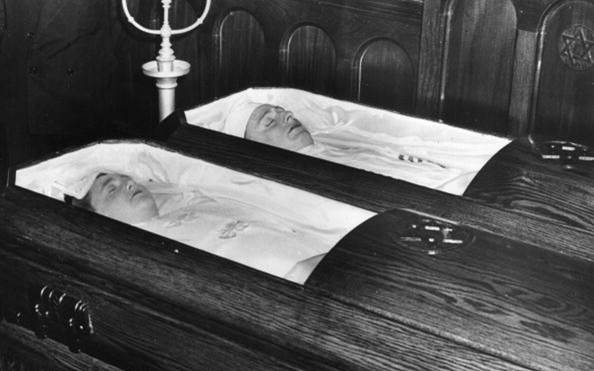 Julius and Ethel Rosenberg were the only American citizens ever to be executed for conspiracy to commit espionage. In retrospect it seems an extremely harsh sentence, but the political landscape of the 1950’s McCarthy era created hysteria which saw the ‘Red Menace’ of Communist domination everywhere, and their execution was widely supported by the public at the time.

Julius Rosenberg was electrocuted first, at 8pm, Ethel Rosenberg followed, and was still alive after the first attempt: she required two further charges of electricity to kill her: as a result of her small stature, the electrodes fitted poorly, in a chair designed for larger male occupants.