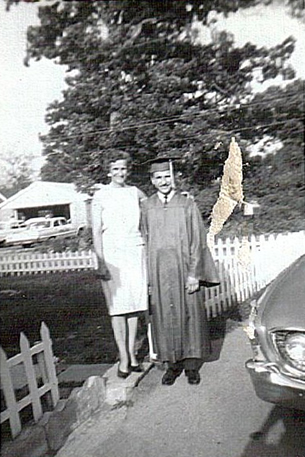 Like an alcoholic, the admission of stuttering is the definition of the condition. When I was a boy I lived in fear of speaking. I stuttered, albeit not severely but still I stuttered. There are many theories as to why one stutters – physical, emotional, traumatic and there are many treatments but none conclusive.

My first memory of stuttering is in the second grade at St. Thomas Aquinas School in Brooklyn when Sister Rose called my mother in to tell her of my problem. I had no idea I had one and in a very typical way, the naming of the problem made it a bigger problem! Now everyone would be watching and listening to everything I said, including me which of course, made it worst. Sister Rose offered no solutions but my mother did: “You should go out and play more instead staying inside listening to your stupid records over and over again”, “think before you speak”, “Enunciate” and the big one – “slow down!”  I still that get one!

I could deduce that my speech impediment was caused by family unrest and soap opera drama. Who knows or is it just genetic? I noticed a British patrician stammer pattern on my mother’s side of the family but we were not to the manor born. “The rain in Spain stays mainly on the plain.”  I never got it …
However, stuttering or not, I was the class clown, making wiseass comments from my strategically placed desk in the back of the classroom. Eventually my teacher would find me out and would punish me by making me stand in the front corner of the classroom facing the wall with a very colorful dunce cap on my head. Little did Sister Mary Joseph know that she had put me in the limelight, on center stage in costume to try out my wisecracks to a captive audience. All I needed was bells to be the class court jester like Danny Kaye n the movie. This was a role I could play and not be me.

I was desperate for attention from anyone, no matter the inappropriate situation. And it isn’t it ironic that I used language as my method. You may not know this, but usually stuttering disappears when a person sings or acts. There are many famous celebrities who stutter: James Earl Jones, Marilyn Monroe, Mel Tillis and Carly Simon.

Also we stutterers are clever people: we develop many tricks to hide our torture to get around full guttural stops. We learn esoteric words (see my above use of albeit) or we use synonyms “Judy Garland at Carnegie Hall was fa-fa-fa-fantastic”, when I meant to say fabulous. Fantastic works as a substitution but if you know Judy you know she was fa-fa-fa-bulous! Syntax comes in handy too so we can twist the sentence around in myriad ways. My studying of Latin came in handy – omnia vincet amor – “All conquers love”.
In 1958 we moved to Newburgh, New York where I attended Sacred Heart Parochial School. Still stuttering, I decided in the fifth grade to enter the parish talent show to show everyone that when I sang, I didn’t stammer. I picked “Shine on Harvest Moon” to sing because I loved the song on my “Sing along with Mitch” album that I played over and over. On the day before I asked and rehearsed with the church organist, Mrs. O’Brien who accompanied me on an old upright no-so-in-tune piano.

So there I was on a cold Sunday afternoon, standing on the stage at Gallo Hall in the basement of Sacred Heart School. Out in the dark were friends and family and another hundred people. I nodded to Mrs. O’Brien to start. I was petrified and I sang standing very still, “Shine on, Shine on Harvest Moon up in the sky. I Ain’t had no loving since January, February, June or July.”

I got through the first part when I saw my mother’s face in the audience. I thought she was gonna run down the center aisle yelling “sing out Louise!”   So I finished up with more bravado. Polite applause. Not my mother screaming out “that’s my boy, that’s my little Anthony,” like from the last scene in The Music Man.  I bowed and quickly went off stage till the conclusion of the talent show. At the end, there was a grand bow of all the performers including my friend Peter who had played “Lady of Spain” on his accordion; Shaking it at the end to great applause.  He won! (The bitch)
The two people I wanted to impress the most were in the audience; my mother and my teacher, Sister Mary Joseph. I ran down the center stage three little steps to my mother. “How’d I do ma?” How did I do?” “Anthony, it was nice. But you just stood there, like a clump and why didn’t you sing, “For Me and My Gal” like on the Mitch Miller album that you play over and over?”  “Thanks ma.” I looked all over for Sister Mary Joseph but she already left. I waited till class on Monday to get a response but she said nothing.

No one got that I did not stutter.

However on the next day, Monday morning back at school I decided to treat myself to lunch with the quarter that my father gave me when I got home from the talent show. He couldn’t go because of his Parkinson’s but he asked me all about it.

During lunch hour, I went next door to the little Italian deli that was popular with all of us school kids. I ordered a small meatball hero.  I slid my quarter into the nice Italian lady, Mrs. Costanzo’s hand. She reached out over the counter, grasped my hand in hers and looked right into my eyes smiling saying to me, “Baby you sang so nice yesterday”. She then reached backed to Mr. Costanza and handed me the larger 35 cents sub. “Shine on, Anthony, shine on!” Holding back my tears, I barely got out, “Oh thank you so much Mrs. Costanza, oh thank you so much.” … I didn’t stutter. She called me “Shine On” till I graduated three years later.

So thus began my life journey in the arts to find a voice, to find a love and not to be known as the stuttering Porky Pig but maybe the sexy actor, Sal Mineo or the dynamic and articulate director Elia Kazan.

But  back then who would have known there was a secret entrepreneur inside me that with the help of all you and especially Gary that I am now here speaking in front of you today, somewhat fluent, still not slow but feeling very successful and loved. “The rain in Spain, stays mainly on the plain.” I think I finally got it!

But what I actually didn’t’ get until I wrote this story was hat Mrs. Costanza for all that time wasn’t calling me Shine On.  She was telling me  to “Shine On!” “Shine On!’

So I  think it’s time after fifty eight years, it’s time to “Shine On” and sing “Shine on Harvest  Moon” again in front of my family.

But I ain’t doing it alone! So please help me out and sing along with Tony.  Somewhere Mrs. Costanza shines on and Mom,  we’re singing,” For Me and My Gal” too.

Sing along with Tony:

Up in the sky;

I ain’t had no lovin’

Since January, February, June or July.

Shine on, shine on, harvest moon,

or me and my gal.

Everybody’s been knowing to a wedding they’re going
And for weeks they’ve been sewing, every Susie and Sal