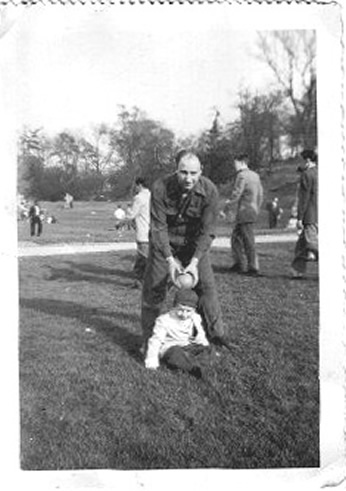 My father and I, before the days of air conditioning, often went to the park on Sundays to escape the heat during then the Dog Days of summer. It is ironic and coincidental that the parks we visited were all designed by Olmstead and Vaux.

When we lived in Brooklyn, my father took me by the hand for a short two block stroll up 9th Street to the entrance of Prospect Park, the jewel of the designs of Olmstead and Vaux. We would toss my red ball that he had bought me, back on forth on the Long Meadow. My father was very lean and athletic and we would sometimes race up to the Picnic House to get out of a sudden summer shower. He always let me win. 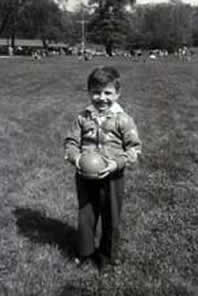 One day the whole family went to the park and while Dad and I were playing catch, my younger brother Michael somehow wandered off up into the Ravine when my mother wasn’t looking as she tended to my newly born sister in her ornate big, black baby carriage. After a short frantic search, a policeman returned the crying lost boy to us. He cried harder when dad gave him a good smack. I was rewarded for my help with a paddle boat ride on the lake followed by a vanilla custard ice cream cone. In the early 1970’s when I came back to Park Slope after graduate school, I returned to Prospect Park only to find it in disrepair and crime ridden. 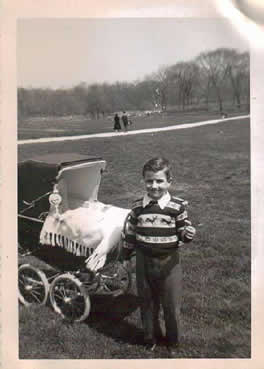 I have always thought of Central Park in Manhattan as my back yard, living from 1966 at various times only a block from the park on West 83rd Street; West 110th Street and now West 96th Street. My father first took me there in 1953 after we attended a rally for Julius and Ethel Rosenberg in Union Square. We drove up in his car and he put me on a stationary horse on the great carousel by the Dairy Barn. It wasn’t long before I was leaning out on the moving horses that went up and down, reaching out to snatch the brass ring. That is my only memory of Central Park with my Dad, so Central Park belongs more to me than to us.

When we moved to Newburgh New York in 1958, my father would take me to Downing Park for his outdoor exercises to stave off his encroaching Parkinson disease. Downing Park was in the middle of Newburgh and designed by Olmstead and Vaux in memory of their landscaper mentor Andrew Jackson Downing who designed the Mall in Washington DC and who died an early tragic death. Downing Park was a green oasis in the blighted chaos of Newburgh, a rundown river city in the Hudson Valley. 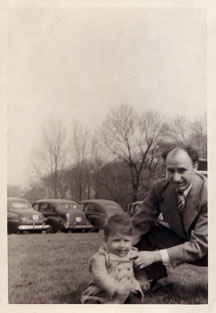 His sickness was the reason we moved upstate, since his factory relocated there in that great mass urban exodus to the suburbs of the 1960’s. The gravel paths that wound around the lake and up the hill to the Pergola were perfect for my father’s peregrinations; it gave him good traction. He was very self conscious about his stumbling and shuffling due to his disease, and the park was usually empty early evenings when we took our walks. He would lean on me as we walked around and around; his fixed glance straight ahead,

concentrating on his impaired motor skills to build up his agility. We didn’t talk except to point out a squirrel, bird or roller skater coming precariously close to our path.  Sometimes he would build up momentum and he would be able to walk a short distance without faltering. This made him very happy and a smile would somehow shine through his rigid face. I could sympathize with this forward movement and joy of being able to walk without assistance for those few steps. I would feel the same way when I sometimes could get a string of words out, glide along and not stutter till the last syllables. 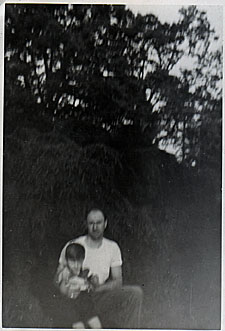 “Let’s go feed the ducks!” My father used to love to feed the ducks on Polly Pond in the park. He would give me 25 cents to purchase corn feed. I would go into the Stone Shelter and the lady behind the counter would give me a tiny brown paper sack with the top folded ever so neatly down and stapled shut. We would walk to edge of the pond and the duckies would waddle up to our hands and peck up the corn. In the fall came the aggressive geese that would bellow and bluster and suck up the corn like an angry vacuum cleaner. I Ioved their warm breath on my open palm. 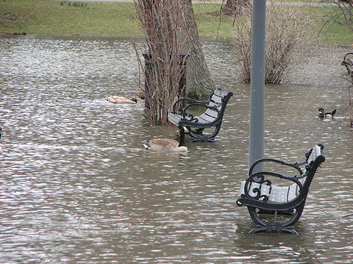 Downing Park after a storm

In July and August, after my walk with Dad, our family stayed for the weekly band concerts. An amphitheater was built in 1936 out of flag stone and granite. Green hedges lined the upstage while a moat filled with goldfish separated the platform from the audience. The audience sat on long green wooden benches on a hill that slightly rose up, a mini-Greek theatre. The concert band was comprised of Italians who wore crisply pressed white shirts, captain hats with black pants and ties looking like a Good Humor Ice Cream Man in his truck.

The program was usually comprised of marches; famous classical miniatures and Broadway show tunes. I was in heaven. Stars and Stripes – William Tell Overture – A Symphonic Portrait of Porgy & Bess (arranged by Richard Russell Bennett) – Leroy Anderson’s Bugler’s Holiday – The Blue Tango. Sometimes a local soprano would sing “Un Bel Di”, “I Could Have Danced All Night” or “Summertime” There were theme nights too: Oktoberfest! – Italian Night! – Salute to Broadway! – Victor Herbert Tribute! and Down South American Way! etc. There would be guest appearances by a barbershop quartet, a Dixie land band, jazz combo or student accordionist playing “Lady of Spain”. I would get goose bumps when he shook the accordion to vibrate the last chorus. I would sing to myself “Lady of Spain, I adore you. Pull down your pants and I’ll explore you!”

My Dad sat in our car parked on a roadway right above the rise of the hill to listen to the program since he didn’t want anyone to see him shake from his palsy. I would sit in the front row all by myself while my mother and sister sat a few rows behind me. I sometimes had to chase down my brother Michael running around behind the stage. We usually didn’t stay for the whole program and left after intermission. My mother got bored easily. I would try to spy out a friend or neighbor who could drive me home. I hated to leave and miss the second half. I am sure I made a pest of myself to people I hardly knew, begging them for a car ride home. I felt trapped in Newburgh, you couldn’t get around unless you had a car and my mother was not a “soccer mom” type who would gladly chauffeur her children to their activities.

It was always sort of sad looking back up the hill to see my father sitting in the car alone like Quasimodo, a lonely gargoyle silently listening, hidden in the shadows of the green cathedral of leaves. Parkinson had left his face expressionless, set in a fixed dull stare of non-emotion. I would run up between numbers and bring him an ice cream cone that I bought from the Good Humor truck. At times I would gently wipe off the vanilla drips from his stubbly chin. 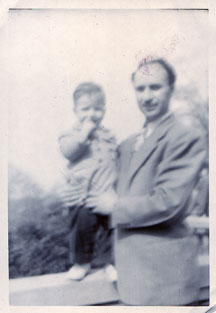 One night there was a sing-along and all the audience joined in. My family was not the sing- around-the-camp fire kind of family. We would watch the TV show, Sing-along with Mitch in silence. I was particularly self conscious about singing around people even though I sang along to my Broadway LP’s when no one was home. I gave John Raitt a run for his money when I sang both parts of “Hey There.” This is curious to me, since I never stuttered when I sang so you think I would “Sing Out Louise!” any chance that I could get. I had a beautiful voice when I was younger but when I became a teenager and to this very day, I can not hold a tune and sing flat. I worry that I don’t sing good enough. I never play a game I can’t win so I guess I don’t sing out loud from fear of my mother’s ever present criticism that lingers till.

However that night the voices of the audience so filled the night air in the park that it was hard to resist. Everybody was lustily singing along as I looked back and saw my father mouthing the words from the car with a big smile on his face. I couldn’t hear my father singing but like a deaf man I could “lip read” the melody of his voice.

With the strawberry blonde

And the band played on.

With the girl he’d adore

And the band played on.

But his brain was so loaded

Would shake with alarm

With the strawberry curl

And the band played on.”

Downing Park is still there up in Newburgh; Prospect Park is there and has had a renaissance in Brooklyn. And I walk every week in my beloved Central Park that will be there for all time. My sister and brother are still here. My dad however is long gone.

I remember our days in the parks – Prospect, Central and Downing – whenever I hear a marching band or a duck quack or a goose hiss, or the ding-a-ling of an ice cream truck, or the organ at the Carousel. I hear my father’s silent voice singling along. Maybe one day I will sing a song out loud and not give a damn. 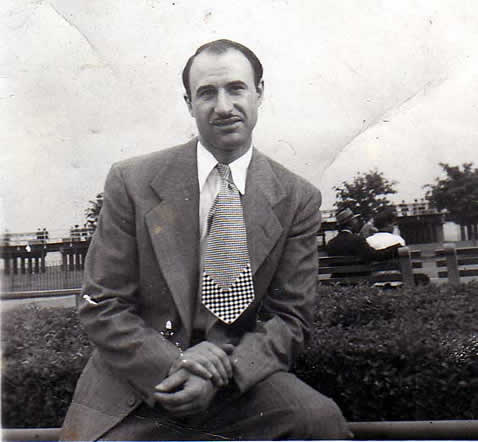 thank you, Olmstead and Vaux.

“Sing, sing a song  (press to listen to this song)

Sing of good things not bad

Sing of happy not sad.

Make it simple to last

Don’t worry that it’s not

Good enough for anyone

Let the world sing along

Sing of love there could be

Sing for you and for me.

Make it simple to last

Don’t worry that it’s not

Good enough for anyone