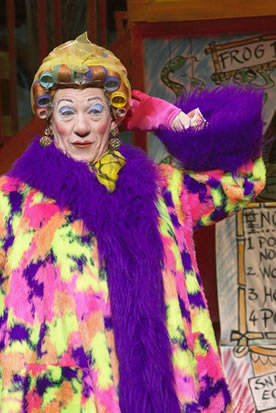 John Lahr has written an insightful portrait of Sir Ian McKellen in the August 27, 2007 edition of the New Yorker magazine. One aspect of this wonderful actor that goes unnoticed is his daring coming out and his great contribution to gay rights in the UK.

However I cannot think of a single American in the entertainment industry who has been as courageous as a spokesman. We have had no one to lead or stand up for us with the authority that being a celebrity incurs.

We can only revere the dead icon of the crucified Rock Hudson who by his death made Elizabeth Taylor, the Virgin Mother of Aids. Or laugh at the closeted minstrels of Paul Lynde and Charles Nelson Reilly. If only we could have looked up to the example of the of the “marriage” between Cary Grant and Randolph Scott. Or if Garbo really would have talked, Dietrich sang and Tallulah laughed at the “love that dare not speak its name”.

Would that John Travolta and Tom Cruise would blast out of Scientology and fess up. Where is our Martin Luther King? It is time for Kevin Spacey to step from behind the Paramount bar and lead us into the Promised Land of equality. “I have a dream” girls.